USBSecure Enterprise protects your company network from unknown USB devices. You can define allowed USB devices in whitelists on a per-user basis.

Reduce the number of PC support tickets and increase the quality of your ticket processing. 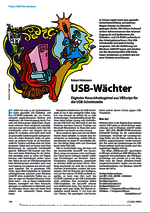 For the past 15 years, we have been working on security in corporate networks. Our first article on port security was published in 2003 in the magazine „c’t – Magazin für Computer Technik“ (Edition 08/2003).

As a result of the excellent response, the software – which at that time was still written in VBScript – was developed further and became a practically tested, fully functional USB security solution before again being featured in c’t 04/2006. Since 2006 USBSecure has been used by several thousand companies worldwide. Please also take a look at our History section.

Up to Version 2.x, USBSecure was freeware, with a large number of copies being distributed. Since Version 3, the software has been sold commercially. Since January 2011, USBSecure has been further developed, sold and supported by Lugrain Software GmbH.

The corporate headquarter is in Schotten-Rainrod (Germany) near the A5 freeway.

or use our > Contactform